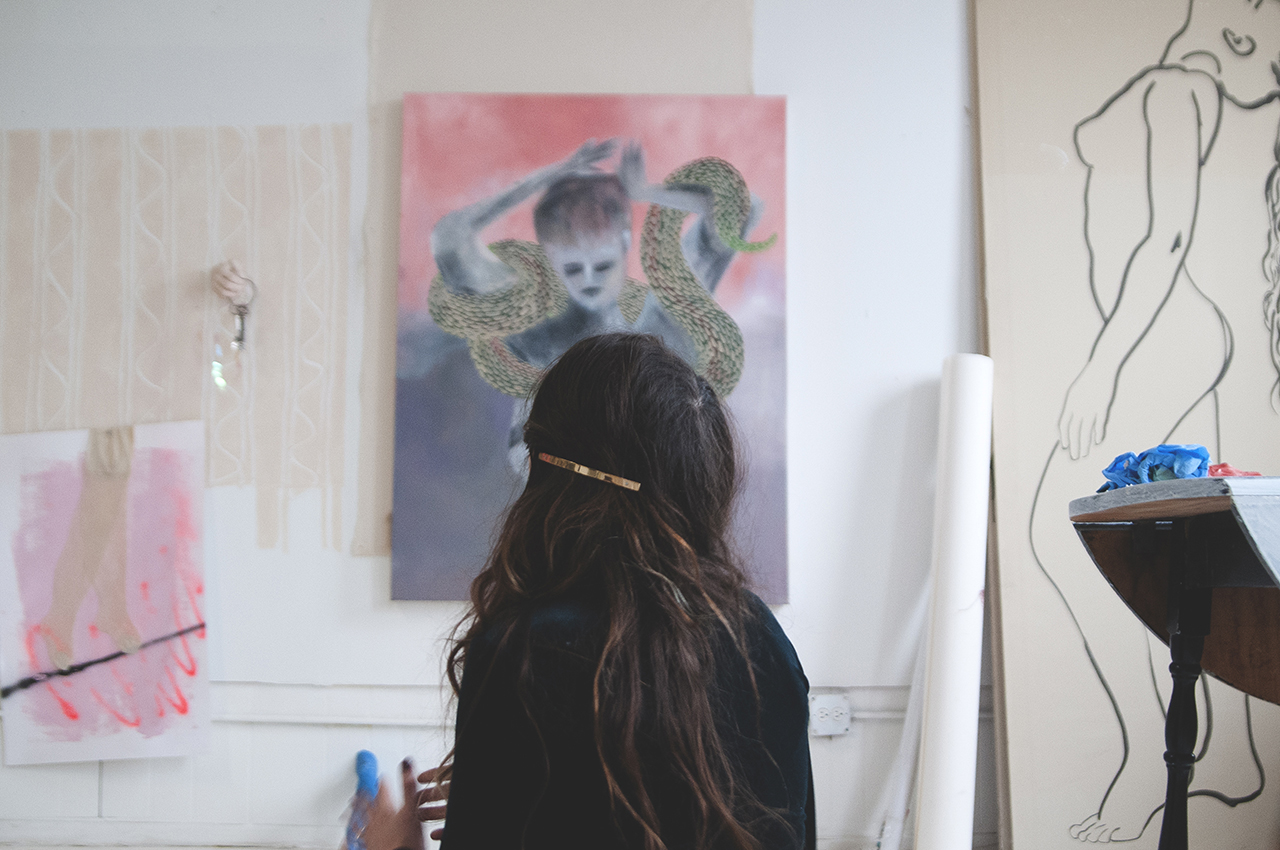 Arranged from overlooked memories, Chelsea’s paintings tap into the undocumented moments of her recent past, turning them into fantasy on canvas. Often distracted by images imprinted on her mind, Chelsea chooses to paint the images instead, removing them from her consciousness so her focus remains on her environmental paintings and cement-dipped sculptures.

I\W: Is your band, “Apocalypse Forever,” more of a performance group than band?
CC: We make a lot of stuff. We often think we are going to practice something in particular, and then end up making drawings or paintings or taking photographs. It’s making as a collective. When we are together we can transition into singing and playing music, it ends up being a totally free space. There are five of us with permanent room for a rotating sixth member. We get together once a week at our space in the Carroll Arts Building. After our current project is complete it will transition into Caligula Theater, a space we will run together. Right now we are creating a dream play. It’s been a long process. We share our dreams and collectively respond to them, trying to weave them into a unified story. We have a self-imposed residency the month of January. A lot of it should be ironed out then. The members are Ben Foch, Mike Kloss, Leo Kaplan, Hope Esser, and myself. We have been working together for a little over two years. 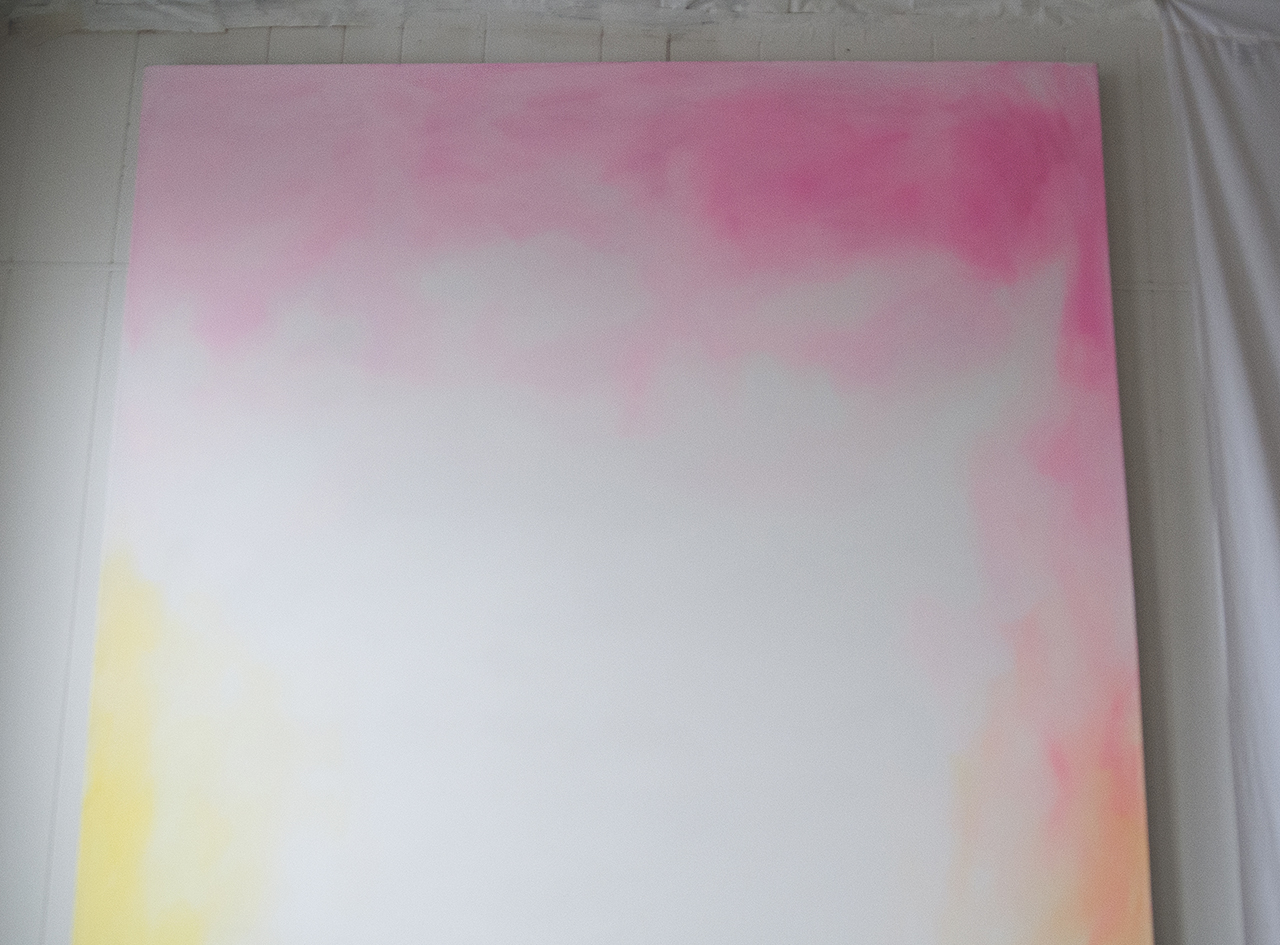 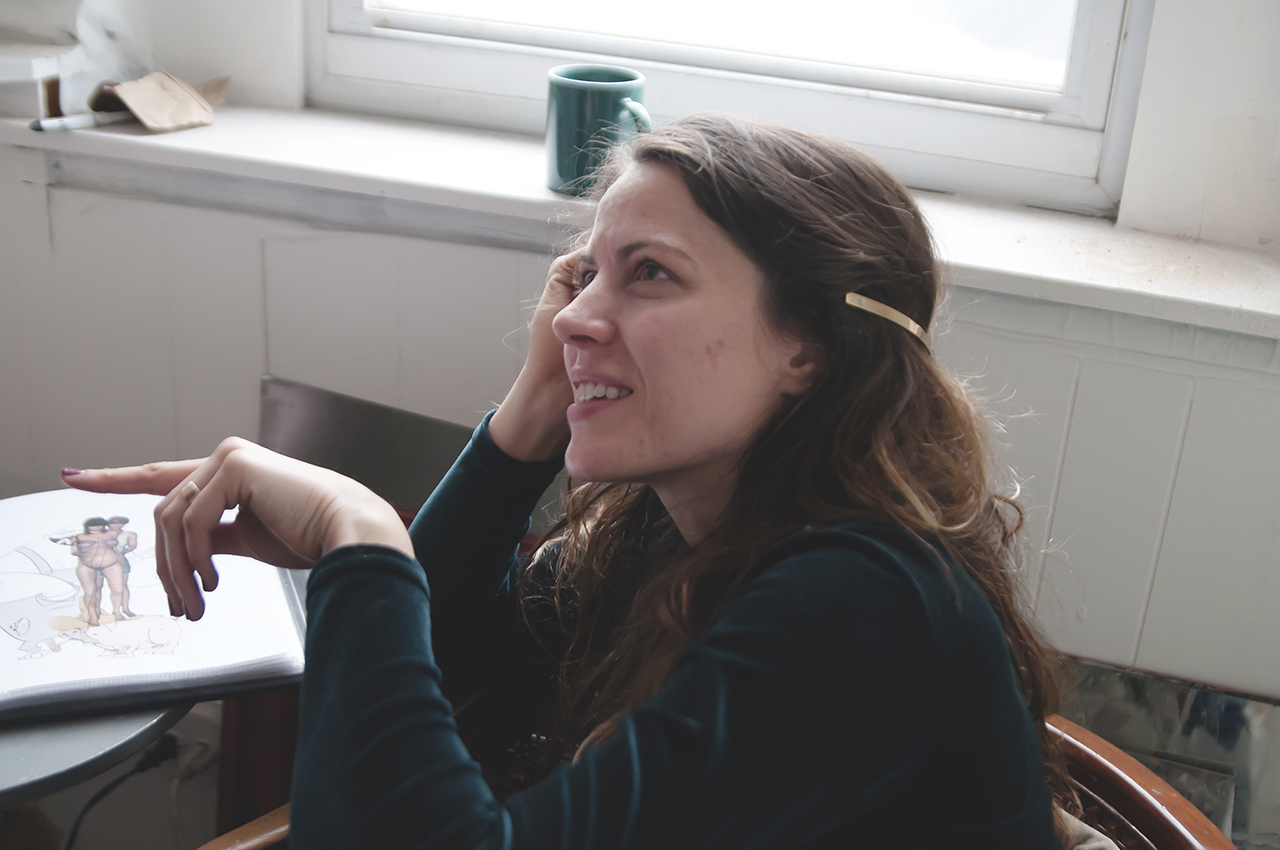 Your practice has so many components that extend to other people close in your life, including your collaborations with Apocalypse Forever and Ben Foch. What percentage of your practice is entirely your own?
It changes. I am definitely at the beginning point of a period of time that is mainly my own work. It is pretty organic. I will have a few months where I am just doing my thing, but I am sure that something will happen in the near future where Ben and I will want to make something together. Maybe half of my practice is entirely my own. 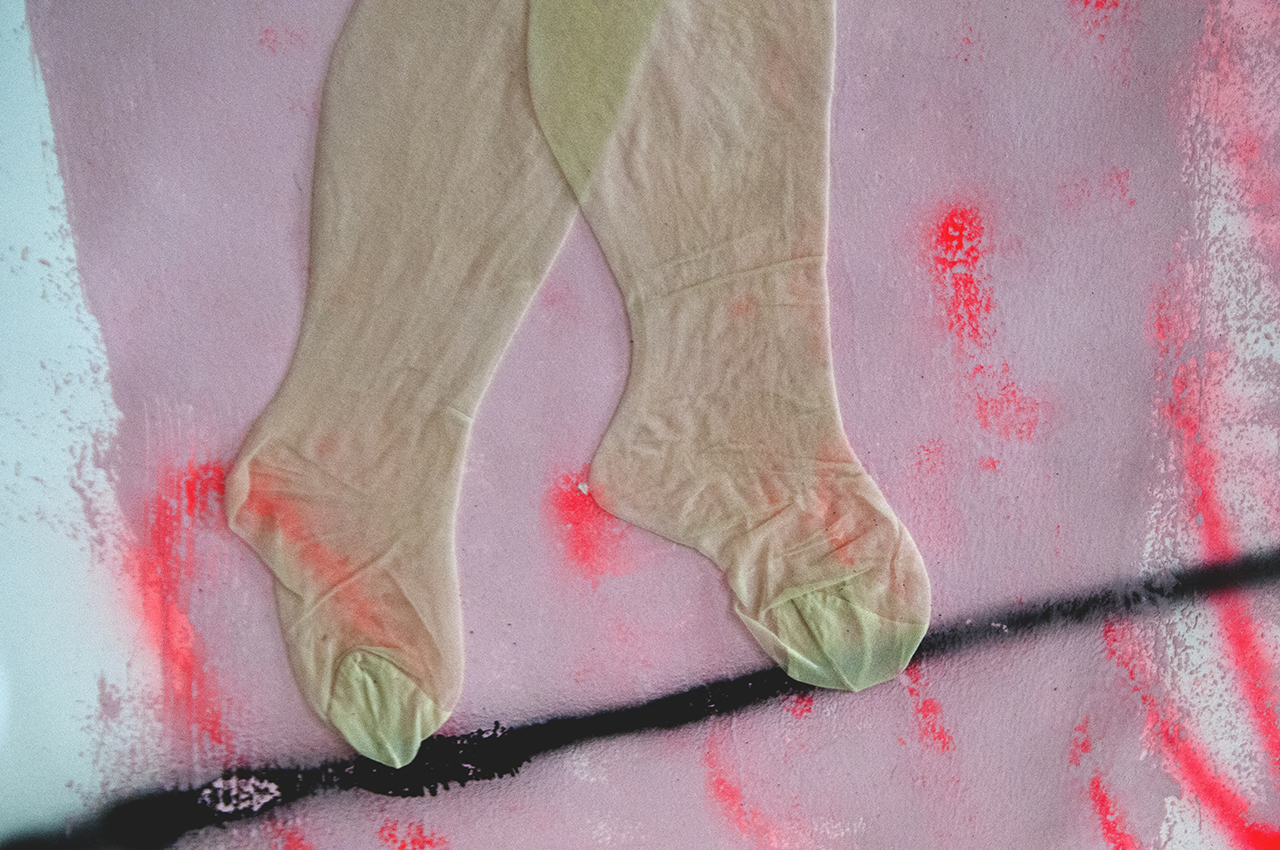 What distracts you within your practice?
There is a larger body of paintings that I am consciously focused on, or a type of painting that I am working towards, but there are also little paintings that emerge out of images I become unconsciously obsessed with. In the process of my larger practice there is this perpetual mental chatter—I think of the mind as this automatic machine that is constantly emitting all of this chatter, and I think that images function that way too. One particular painting I have done recently is from an old catalogue cover of an anarchist publisher that I’d gotten some books from in the past. It has floated around the studio forever, but about a week ago I realized that I was obsessed with the image on the cover and finally got it out of my mind. It’s funny that it can take a while to connect the dots from the mind’s eye to form. It feels good to just make a painting and move on, get it and its associations out of my mind and onto the canvas. 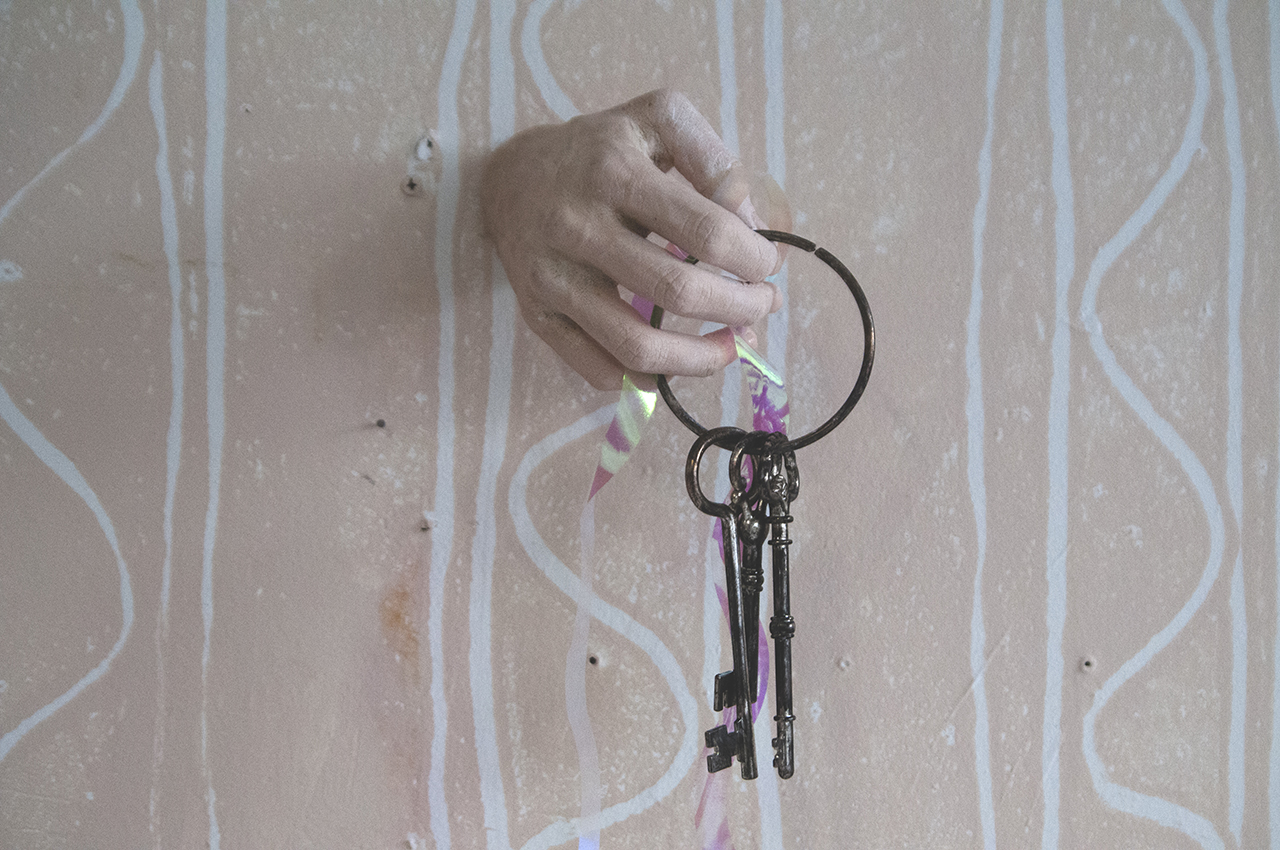 What did you originally study in school?

I had a dual degree in studio art, and art history theory and criticism. The studio work was mostly performance and sculpture. Whatever academic topics I was into would weave in and out of the studio practice. When I was really young I painted. My mom set me up with a make-shift studio from a very early age. She isn’t directly an artist, but she is very creative and inspired. When I got to school I rejected painting and was really disenchanted by it and was interested in the bulk of other things you could do at the Art Institute. It was all new. In a way it was really nourishing, and also distracting. I loved having Ben and I’s gallery New Capital in that way too because I met so many people that had a practice that wasn’t mine, but I was still interested in seeing what they made. I think I had my painting reawakening a little before we started New Capital, and I have since gone off the deep end with placing it back to the center of my practice. This is the beginning of recommitment.

Are the objects you are making at the same time as your paintings assisting them, or existing in a different realm?
There is a definite relationship between the objects and paintings. They are in constant conversation, building off of and responding to one another, and I think I’m ultimately interested in them as resources for installations. In a show at Important Projects this past May, I created a room that was inspired in part by a child’s bedroom, and the emotional/psychological qualities of the adult memory of that space. The monoprinted finger paintings on the wall functioned as wallpaper. The paintings, sculptures, and framed laser prints were things happening in the studio before the show, but the show allowed for their relationships to be foregrounded. I feel as if that is my final form. Even when I dig deeper into my private space in the studio, it is very much an environment. Hopefully things can get plucked from the environment and function individually in other places for other purposes too. I think the cement shoes have gotten some play because they play well with others, and it doesn’t hurt that they’re easy to ship. It’s nice to have something that people can extract from the mess. 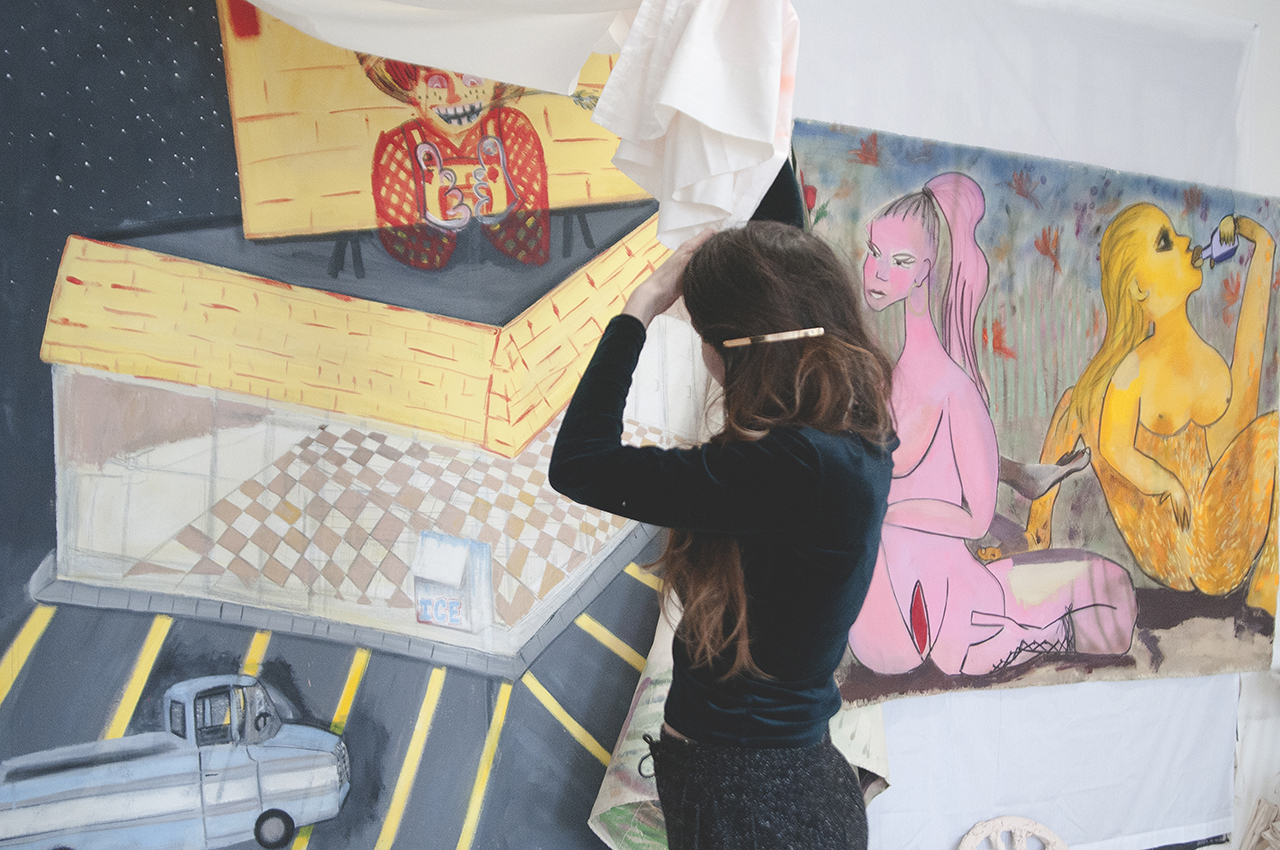 When did you start creating your cement sculptures?
Sometime in 2013, after Ben and I completed a series of cement burgers. Then I started working on the shoes. They were this guttural, intuitive gesture, just dropping the shoe in a bucket of cement and then molding it. They also hold the burden of daily gender performance and memorialize that. Since the shoes, the cement umbrellas have emerged too. I’ve grown a collection of broken umbrellas since 2009. Whenever I see a broken umbrella I take it home. This usually happens in the spring. They are like these little critters. I always thought I would do a show that was an empty room and just the five umbrellas, or however many I had at that point. Now I don’t know now if I want to ever show them in that way, instead they are becoming these monuments—something you would see at a special cemetery. 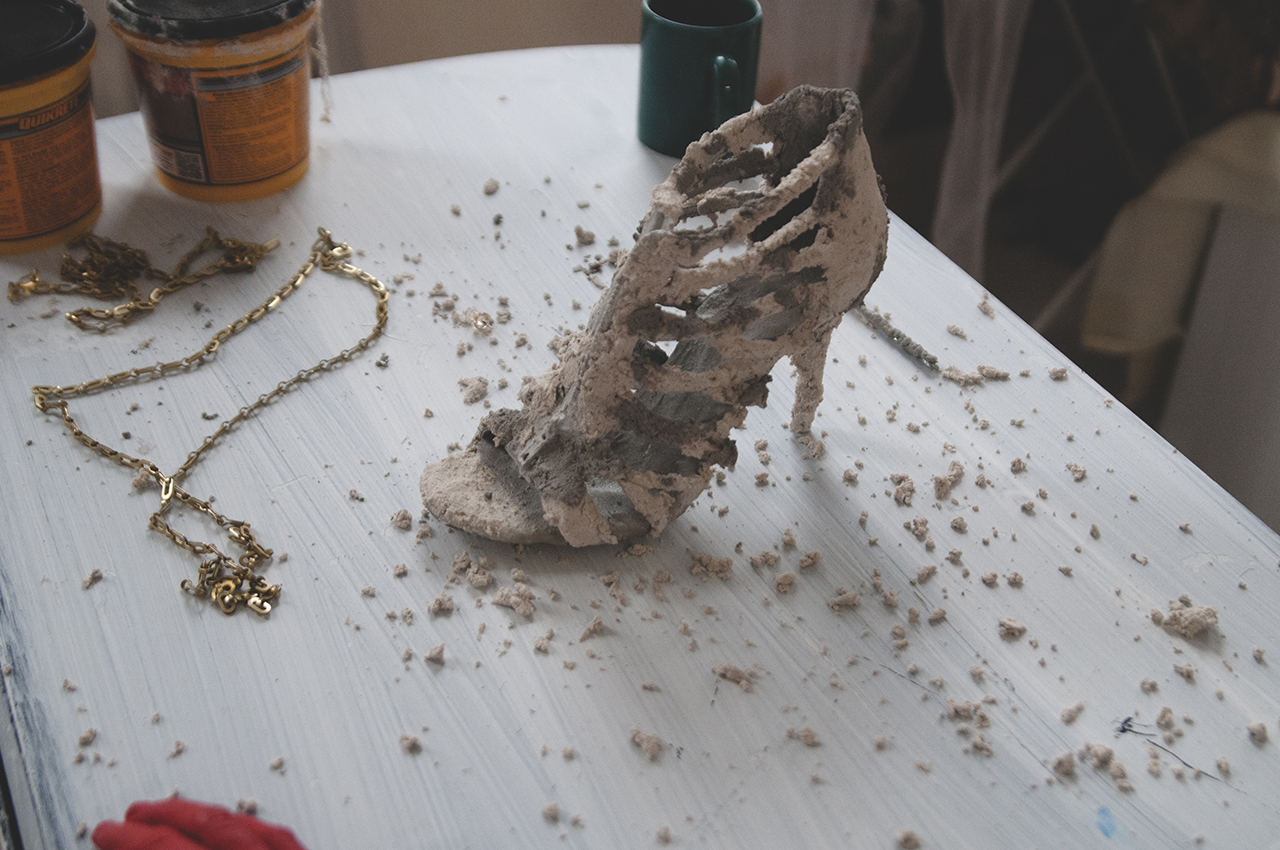 Why do you think you gravitate to such a feminine palette and aesthetic to address gender constraints?
I think it is just because that was what was presented to me when I was growing up. A while back I wanted to seriously look at what had come into my brain and emotional body to see what influenced me growing up. I made a commitment to take a look at it. I realized I don’t need to invent something outside of me, there are so many things already there. The girlyness was just part of my environment growing up with my little sister. I might finish with it soon, but I am just amazed at the degree to which it is ingrained. I’ve had too many conversations with people in my generation about songs from The Little Mermaid, things like that are so deeply ingrained I think it is just mining what’s within and seeing how to work with it. Even though I have a very feminine aesthetic, I don’t think of my experience as feminine. It has just been my lens. 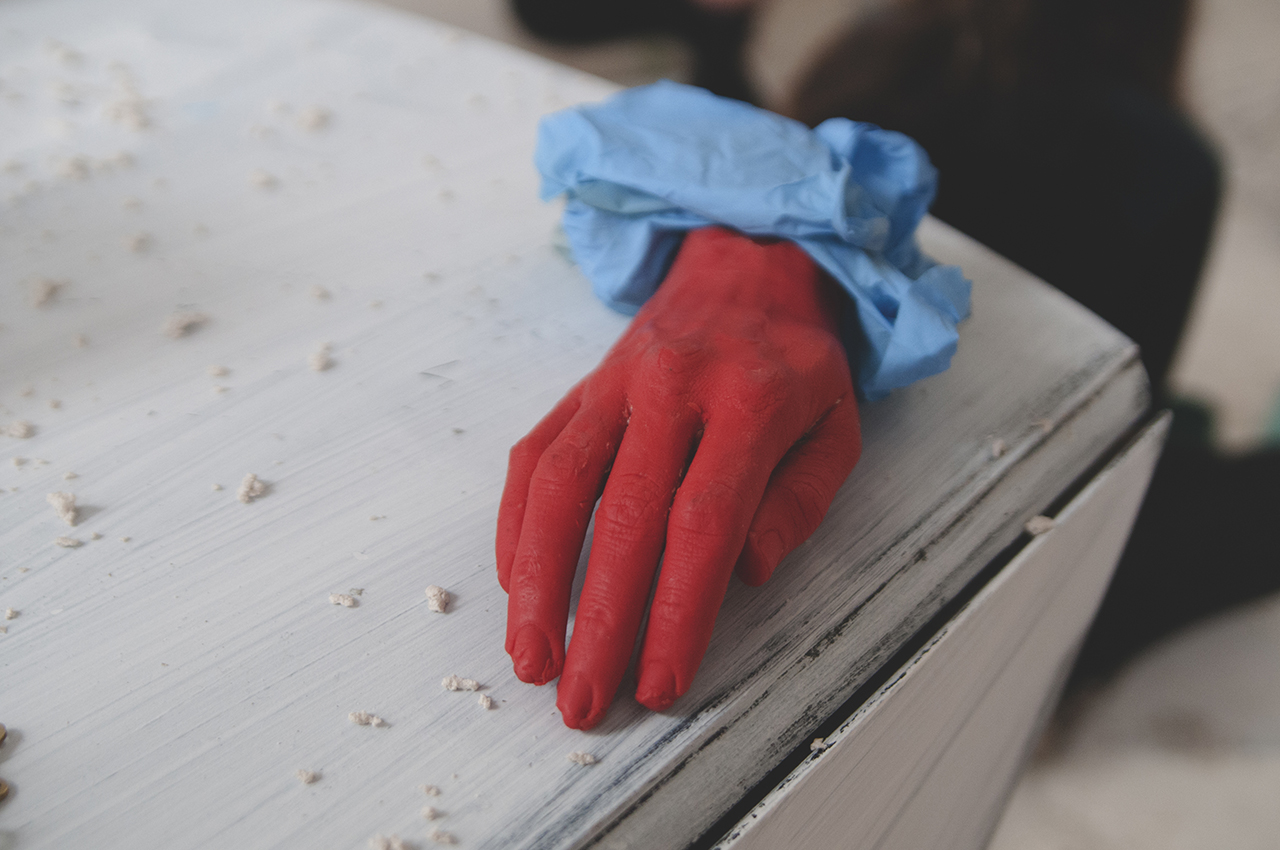 Have you been thinking about the burden of gender with your new resurgence of painting like you had with your previous performances?
The paintings are mostly memories from performances that were not documented. I didn’t set out to do it that way, but I am realizing afterwards that is what is happening. After finishing a recent painting I realized it had a very literal explanation, but don’t necessarily want it to be read literally because they are intended as archetypes. In the performances they were probably archetypes as well. Within this painting, I am in the middle and my friend Kandis is at my right side. To the left is our third person, the being we are together. All three figures are in a nocturnal garden scene. I think it’s like this with most friends if you really connect with them. We had done this performance together in which we received hypnosis by a friend who was developing his technique. We were making dances together at the time and wanted to be hypnotized together. We ended up being transported to these different scenes like the aftermath of a hurricane, a jungle, Vietnam, and we both had these vivid experiences with these places under collective hypnosis. We decided we would do a photo shoot to recreate this subconscious space we were haunted by. We recreated the environment and dressed in bizarre costumes and took these photos assisted by the window plants at Roots & Culture. The photos are so direct that we choose not to show them, they are beautiful but a little too in your face. Little is tangible from this era of creation. The painting serves that purpose now. This experience had taken up a lot of mental and emotional space and is now on canvas.

How have the casted body parts of your hands and feet found their way into your practice?
There is a historic notion of privacy that is really important to me and it seems that people are losing the understanding of it. You could say that its because of social media or big data, but this older concept of privacy as something that belongs to you—that inner place I feel is getting farther and farther away from people culturally. Most of the hands started as fixtures for these really personal talismans, a pair of rose-colored carnival glasses, a set of keys, a Capri cigarette —objects connected to particular emotional meaning. I don’t need others to know what that exact meaning is, but that this type of meaning exists. 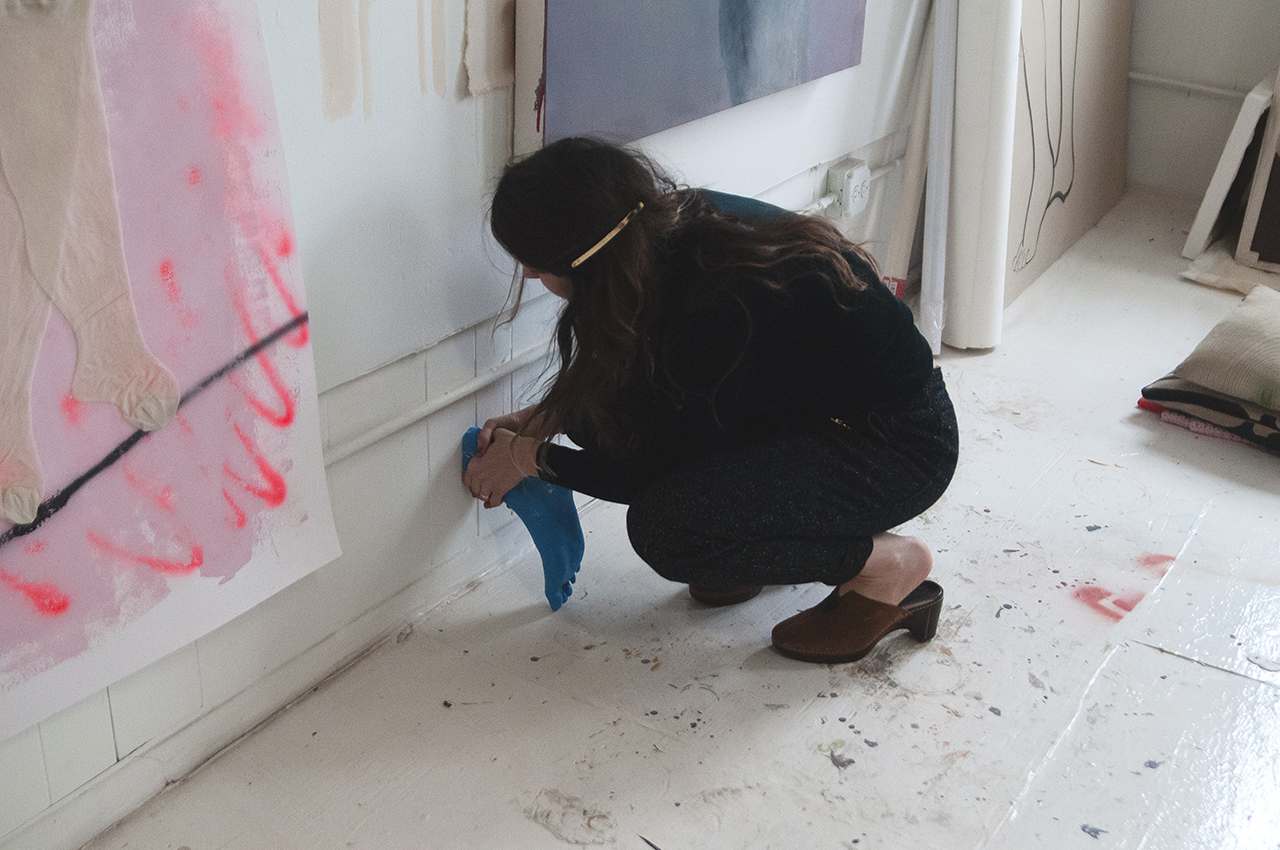